Living in Babylon: An Exposition of Daniel 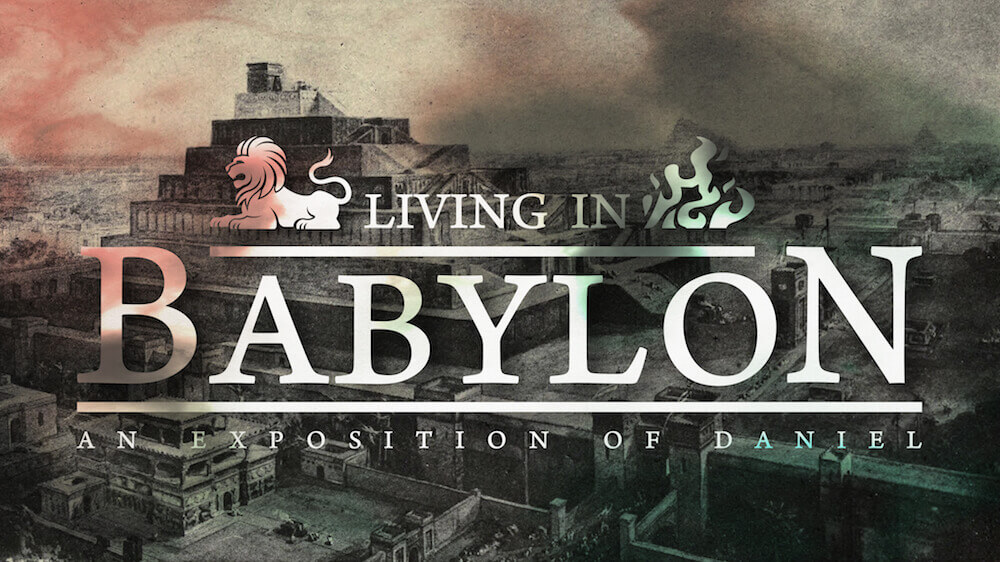 Do you ever worry about the future? You watch one of the 24 hour news channels and all you see is war, terrorism, school shootings, natural disasters… “What’s this world come to?” you ask. Perhaps you don’t worry about yourself, but you worry about your kids’ future? But what if you could trust God with your future and your families’ future? What if God had already appointed times for the future, so that He not only knows what the future holds, but He has ordained it? And what if God would let you in on some of the details? In Daniel 11, the Lord revealed His future appointed times for His people, so that Daniel would understand what was to come. We can understand the times the Lord has appointed and respond accordingly.

As exiles in this world, we often need strength and encouragement for the journey. Some of us are in mourning for the loss of a loved one or the loss of some other precious thing to us. Some are weak in body and need healing. Others are weak in spirit and need encouragement. Some are afraid and need someone to alleviate their fears. Some of us are lonely and have gone all week without the touch of another person.

But what if we could experience the touch of the Master’s hand? His touch to strengthen and to guide. His touch to heal and wipe away our tears. His touch to know that He is with us no matter what storms may lie ahead. We have a very basic human need for touch, especially for the touch of our Creator hands.

Why do we need a “covenant-keeping” God? Because our world is full of broken covenants and broken promises. We sign contracts and promissory notes, but we over-extend ourselves and don’t pay what we owe. We make promises to our children, but something more important comes up and we don’t keep our promises. We promise to “love and to cherish til death us do part,” but our world is filled with broken marriages and fractured families. We even make promises to God to change, to do better, maybe even to join a church, but we are a covenant-breaking people. We want to change, but only a covenant-making, covenant-keeping God can save us from our brokenness.

In the book of Daniel chapter 9, Daniel called on the covenant-keeping God of Israel to forgive and restore His people and His city, Jerusalem, and God not only answered his prayer, but also revealed to Daniel details about the coming of the Messiah and His eternal kingdom. We can be encouraged because our covenant-keeping God still answers prayers for forgiveness and restoration through the promise of His Messiah, Jesus Christ, and His eternal kingdom.

In the eighth chapter of Daniel, he recorded a second vision that contained greater prophetic detail about the next two world kingdoms and specifically about a ruler that would severely persecute his people for a short time before the Lord removed him and restored their worship to its rightful state. This vision was fulfilled within 385 years. Although Daniel’s vision has already been fulfilled, we can still let it give us confidence in God’s plans for our future, for it foreshadows an ultimate fulfillment of a time of tribulation that the Prince of Princes, our Lord Jesus, will return and bring to a close.

Today, we’re in chapter 7, which begins a huge shift in the book of Daniel, moving from the narrative history of the first six chapters to what students of the Bible call “apocalyptic” or prophetic writings. Moving from chapter 6 to chapter 7, is like turning the TV from the History Channel to the SYFY Network–– we’re going to have to adjust to understanding images and concepts that are out of this world! Because in this chapter, God pulls back the veil on the future activities of this world’s kingdoms and the activities in heaven that culminate in God’s everlasting kingdom.

Most of us know the Lord’s Prayer. It’s really the Lord’s model prayer for He was teaching His disciples to pray. Remember how it begins? “Our Father which art in heaven, Hallowed be thy name. Thy kingdom come, Thy will be done in earth, as it is in heaven” (Matt. 6:9-10). Ever wonder why He taught His disciples to pray that God’s kingdom would come? It’s because we tend to pray, “my kingdom come” and “my will be done” prayers. We want to be king or queen. We want to be in control. How’s that going for you? How’s your kingdom doing?

Babylon symbolically represents the world’s system – its government, economy and religion. Babylon represents this world. And just as Daniel and his friends were taken captive from their true home in Jerusalem and forced to live as exiles in Babylon, so as followers of Christ, our true home is heaven. Yet for now we live in this world. How should we live as citizens of heaven, so that we honor the Lord of heaven? In the book of Daniel chapter 5, the Babylonian kingdom was judged and brought to an end because its king nor its people honored the Most High God. We must recognize that God deserves all of our honor.

Have you ever considered what God has done for you? Do realize that He was already at work in your life even before you were born? In the book of Daniel, King Nebuchadnezzar proclaimed the signs and wonders that the Most High God had done for him to all who dwelt on the earth. We can recognize how the Lord is already at work in our lives.

How can we continue to trust the Lord when we are going through times of trouble and trial? When it looks like the worst is going to happen, how do we continue to rely on the Lord for rescue? In the third chapter of Daniel, the Lord delivered the three Hebrew exiles from the fiery furnace and caused even the pagan king to exalt Him as the God who rescues. We can place our trust in the Lord who is able to rescue us in times of trouble.

In the book of Daniel chapter two, Daniel put his hope in the God of heaven, who revealed to Daniel that in the end He will replace all human kingdoms with His own everlasting kingdom. As Christians, our hope is in Christ alone whose coming kingdom will replace all earthly kingdoms and endure forever.